Daily Download 3.0: The importance of open data and institutional cooperation 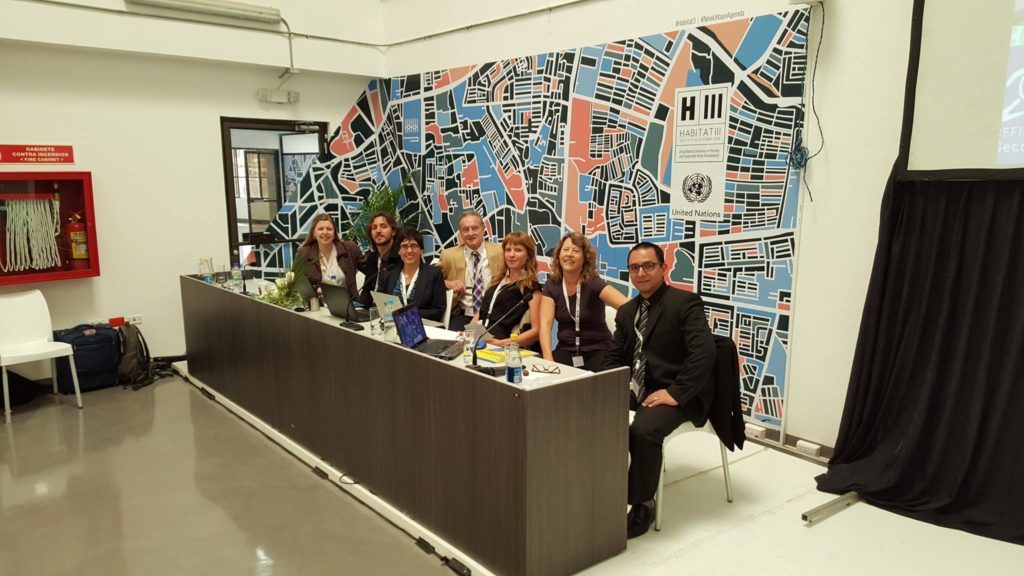 Daily Download 3.0: The importance of open data and institutional cooperation

“When data is made available to people, it catalyzes innovation, be it within departments, interagency, or with citizens,” explains Shannon McElvaney, Community Development Industry Manager at Esri, “Anybody doing research is starving for data. If they have information to work with, they can help planning departments understand and avoid the unintended consequences of their decisions.”

We chat near the southernmost corner of Booth 59, and Shannon goes on to explain what he sees as an overlooked privilege of the American people. “We work with all sorts of open data. The federal government’s data forms the base maps of what we do, from topography to soil composition to demographic censuses. We at Esri compile all sorts of data, standardize it, and release it as one data set without major gaps: natural resources, hydrology, topography, demographics. We are one of the luckiest countries. We are a data-wealthy country. We take it for granted that we have all this data infrastructure, but the world is not created equally.”

Good data infrastructure has as large an impact on a nation’s connectivity and progress as does its physical infrastructure. How will a city improve its public transportation system if it has no information on the movement of people, the efficiency of its buses, or the general satisfaction of the network’s users? Likewise, how can citizens connect spatially in a vast country without trains or bridges or roads? A government cannot build a water system without pipes, and it cannot improve or optimize that system without data. (And if water rights are exclusive, some will thrive and others will wither.) 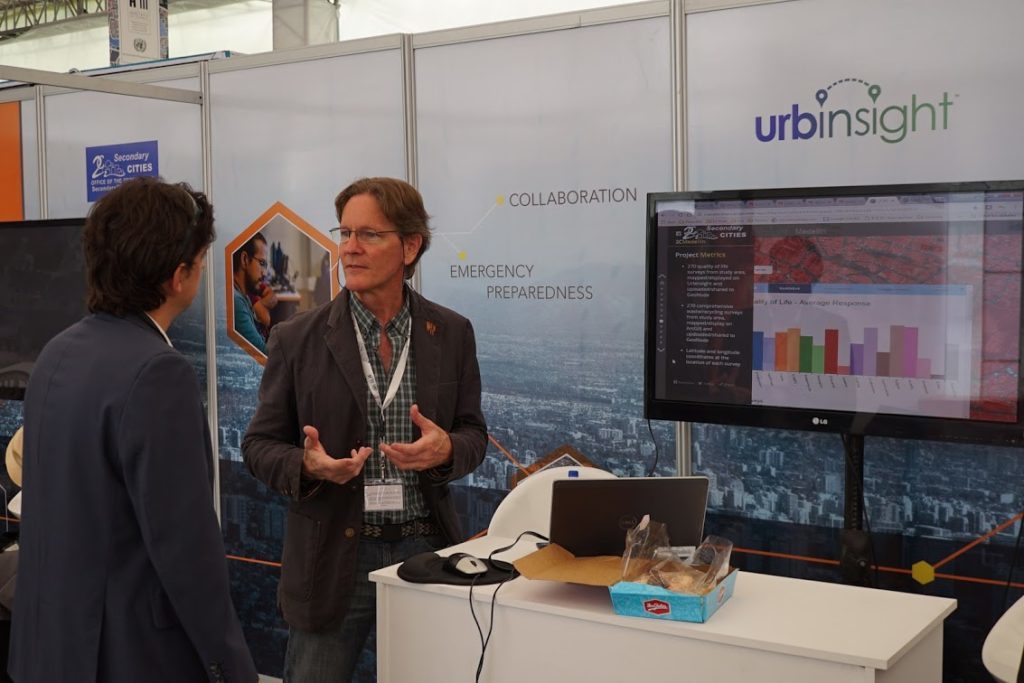 Esri’s Shannon McElvaney getting into the nuances of data.

But open data is not always available, sometimes for security reasons – for example, to protect endangered species or a targeted minority in a civil conflict – and sometimes because the sale of data itself is the funding mechanism for the generation of more data. Explaining how to overcome this barrier, Kirstin Miller, Executive Director of Ecocity Builders, describes the work of her organization and their use of both proprietary and open data. It is essential to find the right use for each kind.

“For educational purposes you can use but not release proprietary data. We respect privacy. Through specific agreements we can use proprietary data for specific purposes, visualizing it without downloading or disseminating it. In Medellin, for example, we used the water and energy utility’s data and analyzed it for visualization purposes without releasing it for download.”

Kirstin’s words hint at the importance of looking beyond open data, which sometimes has good reasons to be obscured, stressing the need for an even more active form of sharing. Institutional collaboration can overcome issues of private property and security, and above all, it can foster a culture of cooperation among public, private, and civil society organizations, perhaps the first step to ensure the progress of the open data revolution and its ability to create change. 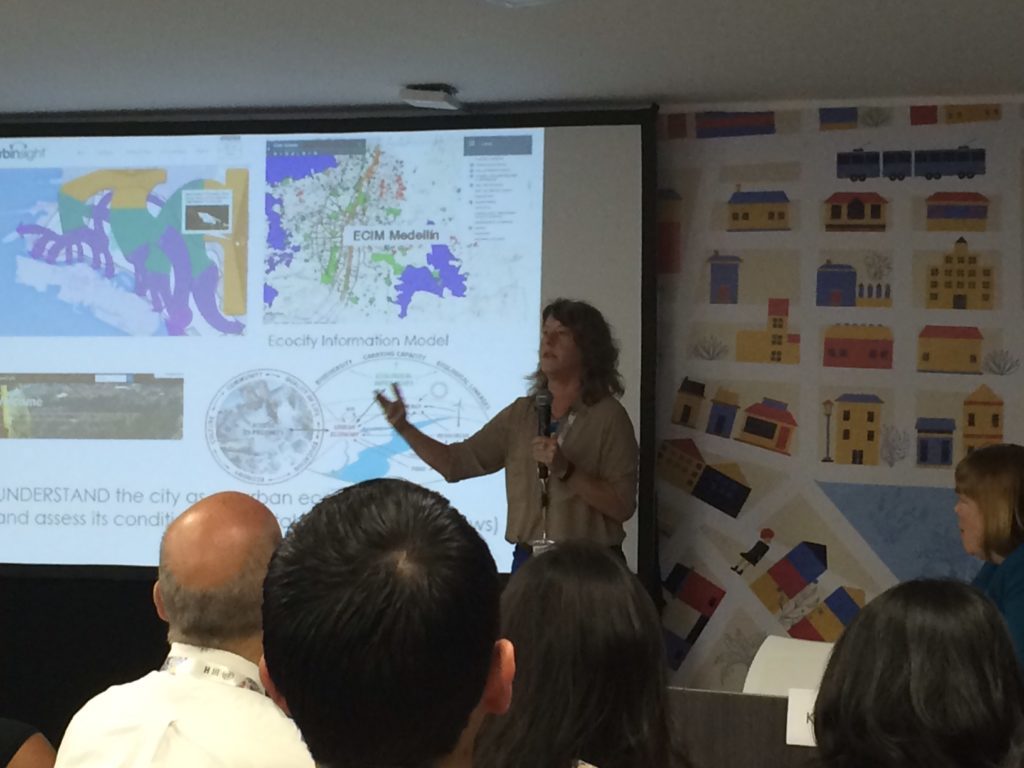 Ecocity Builders ED Kirstin Miller highlighting the importance of cooperation in the jungle of data.

From the southernmost corner of B59, Shannon comments on the fruits of the booth’s public-private partnership, an example of the potential of institutional collaboration. “We are a technology company. We build GIS tools. To make that more useful we compile as much information as we can and release it for free. You can have all the data in the world, all the tech, but what you’re missing is the human element that will create citizen mappers, planners, and scientists. Everybody seems to be working in silos, but if we work in interdisciplinary teams we can have much better outcomes, we can explore potential synergies.”

Kirstin adds to Shannon’s thoughts. “We are a very small NGO with a very large international network. Esri has helped our local academic partners to obtain free of cost the GIS programs we need to work, and Secondary Cities has provided the funding we needed to implement some of our projects.”

Besides the use and analysis of open data, the success of the booth members’ joint projects has relied heavily on working together, using and advocating for open data while thinking way beyond it. “We all complement each other,” notes Marsha Goldberg, Program Manager for GeoSUMR and close partner to both Esri and Ecocity Builders. “Contacts, data, software, capacity, funding, outreach, vision.” 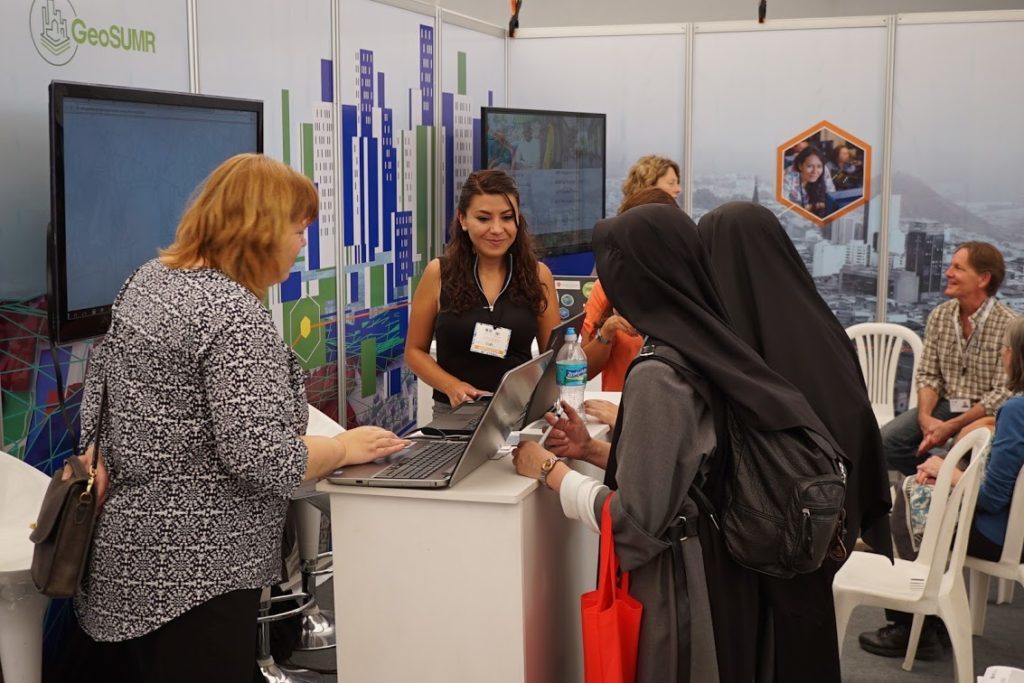 Use of GIS to control Zika and create Healthy Communities
Carlos Cardona, Business Development Manager for the Americas at Esri

Using Esri’s GIS mapping tools, Carlos shows the audience the visual story of the Zika virus, from its origins in Uganda in 1947 to its spread through Africa, Southeast Asia, and Latin America. The visuals show degrees of incidence, following the trends for all the affected regions and making predictions for the most vulnerable zones. The spread of a virus like Zika respects no political borders, and this recognition should result in a paradigm shift regarding the way we address global health emergencies. That is, in terms of geography and environment, not politics.

Colombia is a country with abundant water resources but with poor water distribution. Despite having a population of over 40 million people, there are only three cities where potable water is safe for human consumption. Carmelle describes the government’s new draconian policies to tax water pollution and increase sewage water treatment and shows us a map of the country using Esri’s Climate Wizard GIS tool. “By 2080, precipitation is expected to fall by 20% in Colombia,” she explains while pointing at the map, “So how do we plan for the future?” Esri Colombia, Colombia SDI, GeoSUR, and UNEPLive have partnered with the country’s autonomous regional development corporations to create an integrated water resource management system. The project began by creating a databank on pollution and polluters and the next stage involves mapping out Colombia’s water resources (watersheds, basins, catchments, elevation) and water infrastructure. Next comes the creation of a national water portal, an integrated platform for NGOs, public institutions, and citizens to understand the country’s water resources and to manage them soundly.

Alejandro begins his presentation by asking the audience about the Paris Climate Accord, “So what happened to the Paris climate talks, and where have the climate change mitigation agreements taken us?” One key aspect about the 2015 Paris Climate talks, Alejandro notes, was the discussion on sub-national agents of change – grassroots organizations with the power to complement the work of governments and to push the discussion on reducing carbon emissions into the public agenda. La Ciudad Verde Collective has been one of those organizations since its creation in 2011 in Medellin, Colombia, focusing on raising awareness on the importance of climate change mitigation through initiatives involving strategic urbanism (like placing mask over the faces of a plaza’s sculptures during the worst “bad air” day in Medellin’s history, or creating pedestrian-only areas), lecture series and forums, and incidence in public policy through awareness-raising campaigns and discussions on issues related to food and agriculture, forest conservation, energy generation, and education. In addition, the collective has worked on creating eco-zones and low-carbon neighborhoods. With support from partners like EAFIT and Ecocity Builders, La Ciudad Verde and Low Carbon Cities are collecting data and consolidating large datasets to help policymakers and citizens make better decisions to reduce their carbon emissions at the household, neighborhood, city, and national levels. 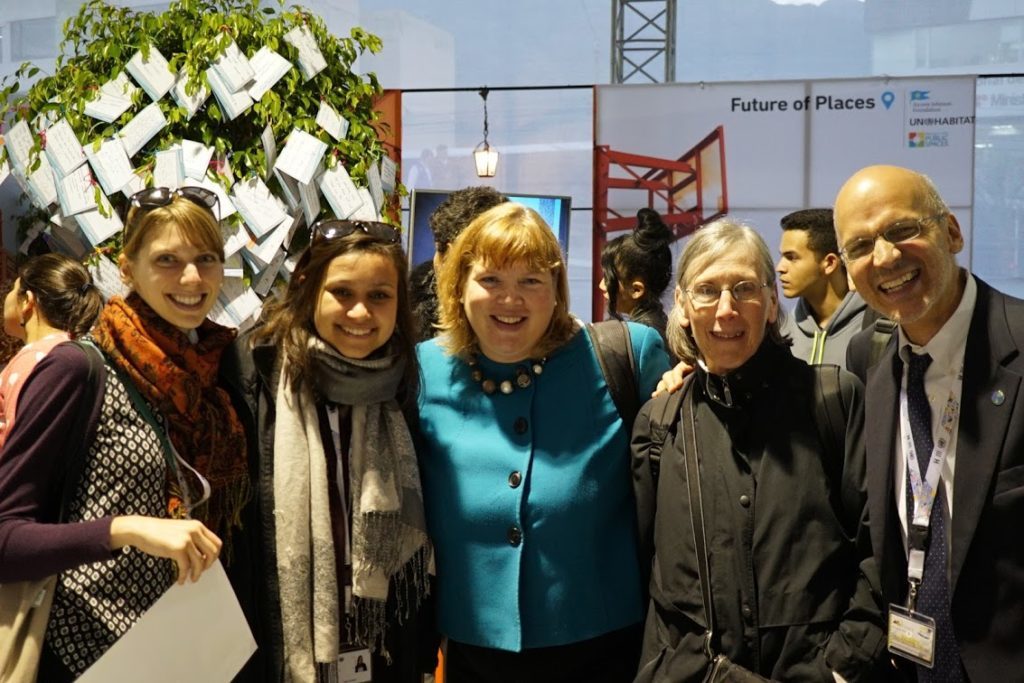