The Municipality of Medellín is the second-largest city in Colombia and the capital of the state of Antioquia. It is located in the Aburrá Valley, a central region of the Andes Mountains in South America. With its surrounding area that includes nine other cities and 3.9 million people, the metropolitan area of Medellín is the second-largest urban agglomeration in Colombia in terms of population and economy.

Medellín was once known as the most violent city in the world. However, its homicide rate has decreased by 95% and extreme poverty by 66%, thanks in part to a string of innovative mayors who implemented plans to integrate the poorest and most violent hillside neighborhoods into the city center primarily through the expansion and new development of innovative public transportation. 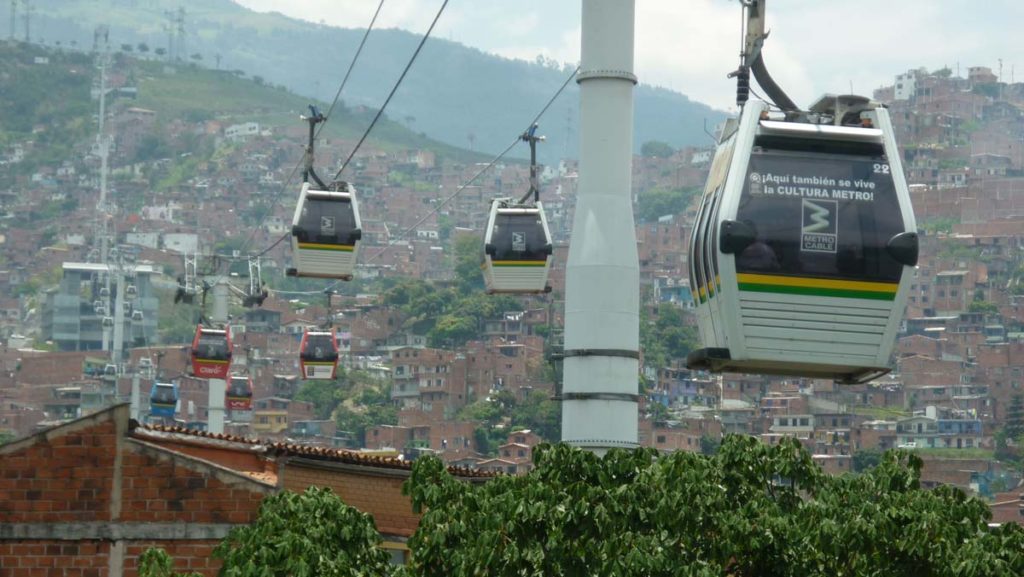 The Metrocable is a gondola lift system implemented by the City Council of Medellín, designed to reach some of the city’s informal settlements on the steep hills that mark its topography. Photo: Sven Eberlein

In February 2013, the Urban Land Institute chose Medellín as the most innovative city in the world due to its advances in politics, education, and social development. Although Medellín has been crowned Most Innovative City, boasts very wealthy neighborhoods and sets an example for urban planning to the world at large, the city is still challenged by harsh economic disparity. Wealth mainly clusters around the city center and decreases exponentially into the surrounding hills.

Many Medellín citizens, especially those living in areas of informal housing, lack access to running water, electricity and/or waste collection services. The city is reluctant to improve or develop in these areas because they are prone to landslides and flooding and as such have been identified as “risk zones”, but citizens continue to build homes and occupy these spaces.

In 2016, Secondary Cities partnered with their on-the-ground implementation team, Ecocity Builders, to lead 2C Medellín. Conducted through the tools and methods of Ecocity Builders’ Urbinsight Global Data Initiative, the two-phase initiative was launched with the primary goal of co-creating more robust urban knowledge systems through engagement for data collection and production with professionals, academics and community members.

In Phase I, a strong local team was developed, including core 2C partnerships between the Medellín planning department, the residential public utilities company, the local university, locally based non-profit organization E2E Foundation known for forging collaborative relationships between developing communities and businesses/organizations that want to invest in social and environmental good, and community members from the Medellín group of neighborhoods in Comuna 8, a municipal district outside of the city center that is made up of several formal and informal neighborhoods. 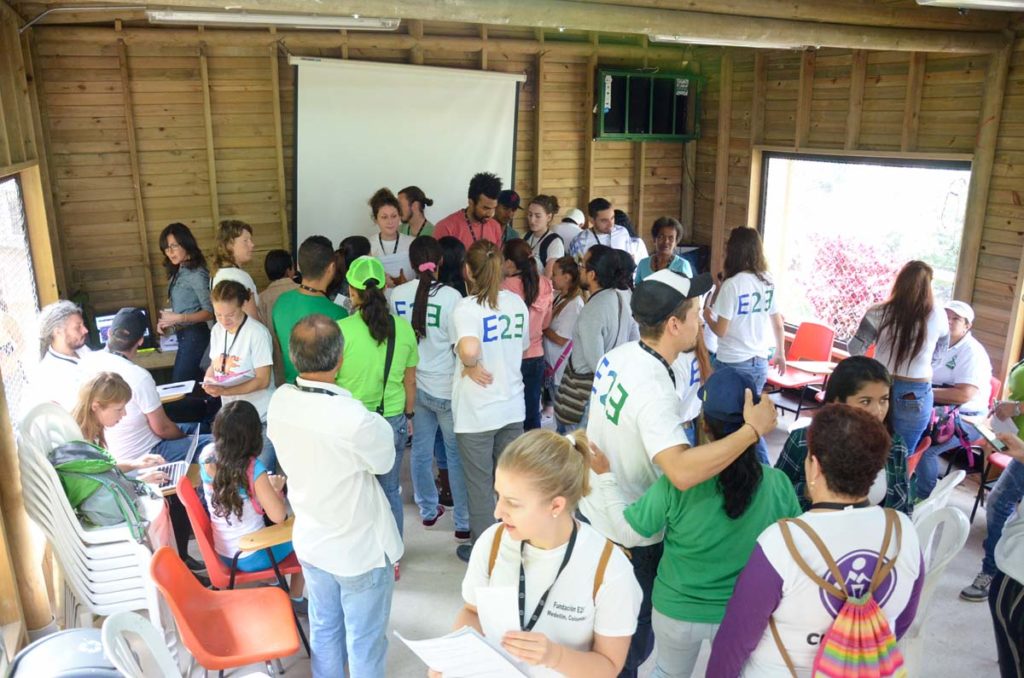 During the initial two professional workshops held at Universidad Nacional de Colombia, the Ecocity Builders team introduced faculty, local officials, architects, and planners to the ins and outs of creating a dynamic mapping platform that visualizes multiple data types with citizen engagement at its core. In alignment with its EcoCompass Educational Compendium, the team introduced the project’s core concepts, tools and methods underpinning the Urbinsight approach to GeoDesign — a means for planning built and natural environments in an integrated process, including stakeholder participation and collaboration, design creation, simulation, and evaluation.

Participants utilized data layers from the open source geospatial content management system Geonode through which the information could be assessed in conjunction with citizen-sourced data and high resolution imagery drawn from government data. The workshop used the information in combination with guided tutorials through which participants could set up a case study of their city and neighborhoods, based on UN Sustainable Development Goal 11.

Attendees also learned how local participation can be applied to urban metabolism. Similar to mapping, a standard protocol is adopted and tested in disparate locations. The result is referred to as a Participatory Urban Metabolism Information System (PUMIS), an important tool for communities who seek to become more self-reliant as well as for cities who seek to adopt multi-level, collaborative forms of governance. 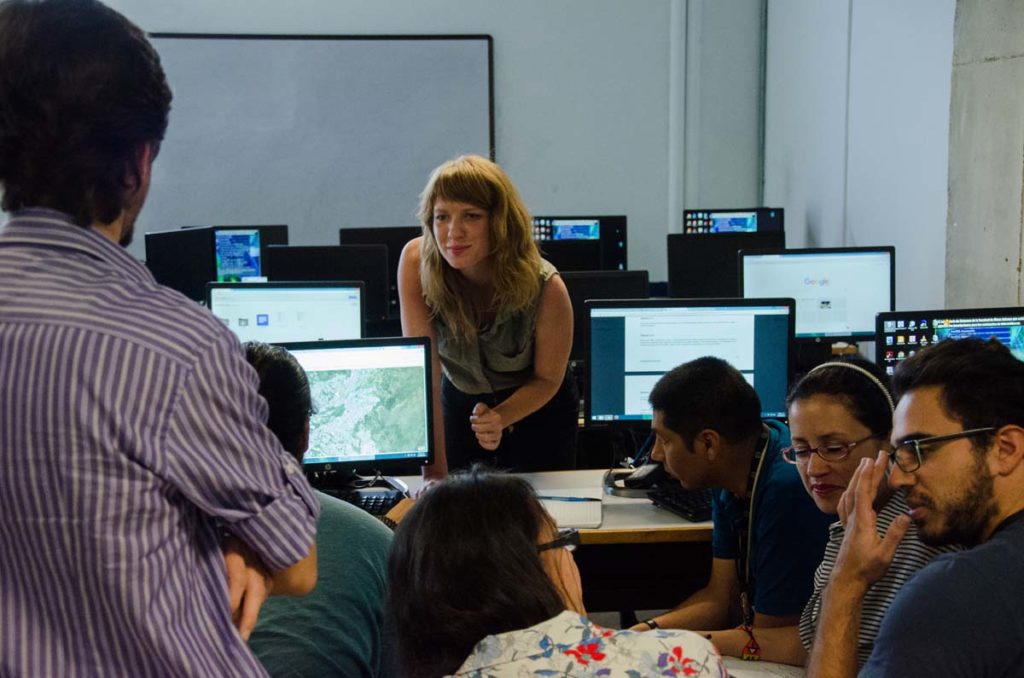 The 2C Medellín team focused their data collection and mapping on waste management, material flows to and through households, and citizen perspectives of waste practices in their communities throughout several neighborhoods within Comuna 8, a priority expressed specifically by community leaders.

With this critical information noted and integrated in the worksheets, National University students and E2E coordinated with the local community to conduct the citizen surveys. After scoping out their routes, the volunteer data collectors swarmed out into the streets of Comuna 8, armed with smartphones, pens, and paper, surveying local residents in their homes and businesses. 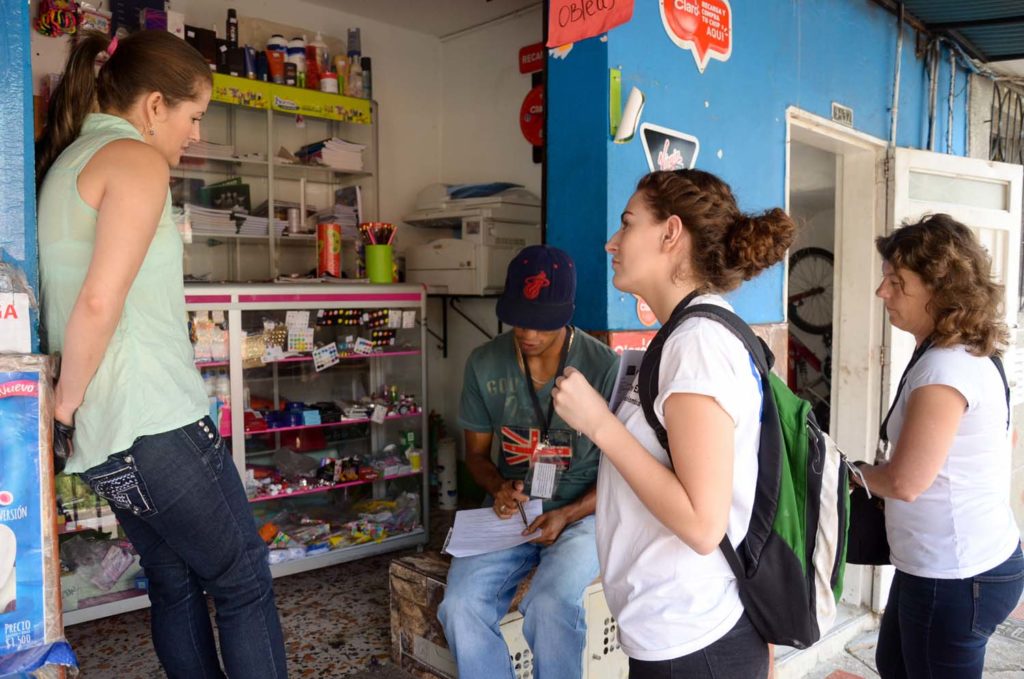 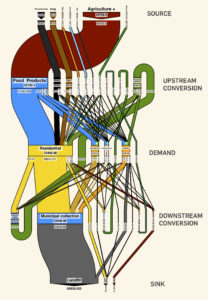 After they collected the data, the students were able to apply their training from the workshops by using Urbinsight’s metaflow app to turn their collective data input into urban metabolic information system flow diagrams. These visualizations proved not only important for researchers to streamline and interpret the household and parcel scale data, but for Comuna 8 residents to understand and improve their own waste stream and for the city to understand the needs of its people.

Urbinsight’s participatory action research methods used in the 2C Medellín workshops and citizen surveys generated new interest in this approach to urban environmental accounting beyond this project phase and study area. Many participants expressed interest in helping to form regional hubs of cities working together under this model. As Phase 2 of 2C Medellín and the other 2C pilot in Cusco, Peru show, the foundations for on-the-ground improvements of local systems and long-term resilience are laid any time the creation of more robust urban data systems is powered by the communities most affected by its impact.

This article is part of a blog/vlog series about urban metabolism and its utility in city planning and management while shifting resource flows from linear toward circular. As part of UN Environment’s Global Initiative for Resource Efficient Cities (GI-REC), these educational posts and videos produced by Ecocity Builders in coordination with the Sustainability Institute, urban Modelling and Metabolism Assessment, and Metabolism of Cities, seek to equip city managers and practitioners with the tools and know-how to build and transition towards low-carbon, resilient, and resource efficient cities using integrated systems approaches such as urban metabolism.