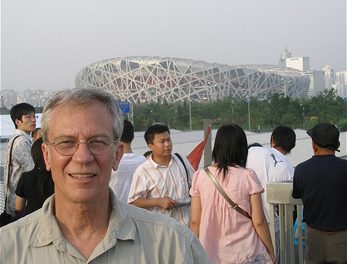 Richard Register at the Bird’s Nest in Beijing

Richard Register, Founder and Emissary of Ecocity Builders, is one of the world’s great theorists and authors in ecological city design and planning. He is also a practitioner with four decades of experience activating local projects, pushing establishment buttons and working with environmentalists and developers to get a better city built and running. Among his many “firsts,” he convened the first of the Ecocity International Conference Series in Berkeley, California.

He was founding president of Urban Ecology (1975) and founder and past president of Ecocity Builders (1992-2014), both nonprofit educational organizations.

Richard illustrates his own writing, and his books are considered as pleasurable for his imaginative drawings as profound in their ecological urban philosophies and visions. Register is the author of Ecocities: Building Cities in Balance with Nature(2002), Ecocity Berkeley: Building Cities for a Healthy Future(1987), and Another Beginning(1978). He is editor of Village Wisdom/Future Cities(1997). 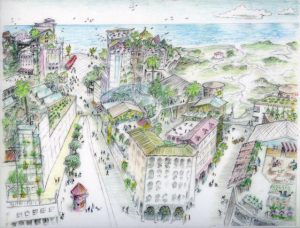 Richard is a frequent guest of organizations and conferences large and small, in the San Francisco Bay Area and around the world. He has spoken publicly in 36 countries and 29 US States advocating for the potential for the pedestrian city to save the world — by reducing automobile dependence, global warming, massive sprawl, ecological habitat fragmentation, air and water pollution and other harms. Cities are the largest systems that humans build, and we can build them to contribute to humanity’s creative and compassionate evolution on a healthy planet, in exciting and rewarding built communities from the village scale to the city scale. 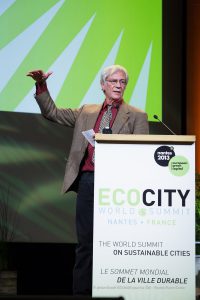 Richard has recently moved on to found a new organization, Ecocity World, which is working alongside us in pursuing the ecocity vision.