The 20th United Nations Conference of Parties (COP) is taking place in Lima this week, with Ecocity Builders in attendance. Lima is an obvious choice to host this gathering focused on solutions to climate change. Lima is the 2nd largest desert city, right behind Cairo, and Peru is estimated to be the third-worst affected country by climate change, after Honduras and Bangladesh, according to the  Tyndall Centre for Climate Change Research.

Lima lies in the great rain shadow of Peru, sandwiched between the Andes and the sea. The area receives less than a third of an inch of rainfall per year. The bulk of Lima’s municipal water comes from rivers fed by Andean glacier melt. But over the past decade the glaciers have all but disappeared and mountain rainfall has declined as well. Lima is poised on a precipice of a frightening future. Over the edge is imminent water shortage. City officials are looking for alternatives with increasing urgency.

We’re no stranger to drought here in California. Despite the plentiful early winter rain, cities, agriculture and industry in the lower half of the state are still threatened with running dry. While bad luck and climate change can be blamed for the shortages, there’s another human villain behind the misfortune: bad planning. Problems arise when cities don’t take into account the resource flows of the ecosystems they exist in. Problems arise when humans put their plans and values above the basic facts of the environment that needs to support them. 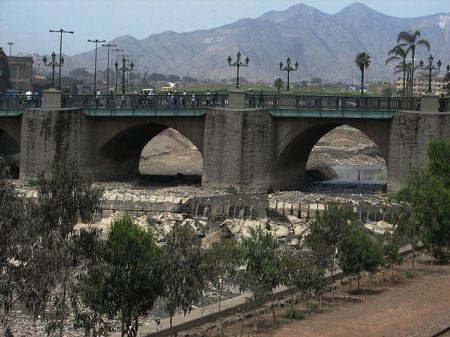 Peru, with its mountains and rainforest, is rich in hydrological resources. But 98% of the Andes’ liquid bounty, including the source of the Amazon river, flows east into the Amazon basin. Why, then, does two-thirds of Peru’s 30 million inhabitants live on the arid Pacific coast?

“This mismatch began 500 years ago with the arrival of the Spaniards,” said José Salazar, president of urban water regulator, Sunass, in The Independent (2011). The massive empires of Incas and other pre-Columbian civilizations built their major cities near water sources in the Andes. But because they wanted to be closer to Spain the conquistadors founded their capital on the coast: “Today, we are picking up the bill for this colonial legacy,” Salazar concluded.

Unfortunately we are left with the legacy of decisions–both deliberate and unintentional–made be previous generations. Lima, a city of 9 million, shouldn’t have been built in the 2nd driest desert in the world. But we have to work with what we’ve got.

Many cities are flocking to “smart” solutions to resource management and the scope of innovation in this area is truly exciting. However, smart solutions aren’t always the best. They can be expensive, resource depleting (rare metals used in computing are a source of devastating pollution), and not culturally appropriate. “If the many failed development projects of the past 60 years have taught us anything,” wrote Toilets for People founder Jason Kasshe, in the New York Times, “it’s that complicated, imported solutions do not work.”
The best solutions are often the simplest. In that spirit, here are a few basic principles and tools that can help water-strapped cities survive the next decades.

1. Reduce. It comes before reuse and recycle for a reason! Reducing our need is the cheapest and easiest option. In fact, it requires you to do LESS, in some cases. Other investments such as removing thirsty vegetation, fixing leaks, and replacing old fixtures are cost saving in the long run. Responsibility isn’t all on the average citizen: big water users like industry and agriculture need to pitch in updating their processes to reduce water consumption, too.

The poorest population of the city can teach the rest of us valuable lessons. Residents of the slums, shanty towns, and other informal peripheries of cities like Lima use dramatically less resources than the more affluent areas. Materials are more efficiently used and better recycled, and water is treated as the precious resource it is.

One of Lima’s informal settlements on the outskirts of town. Photo by Håkan Svensson, Wikimedia Commons.

Unfortunately, the poorest of Lima (and elsewhere) don’t have a choice to conserve. One million of Lima’s 9 million residents don’t have access to treated water, instead paying for water delivered from privately owned trucks at enormous mark-up (watch this video to learn why the poor pay more for everything). The great challenge we face is elevating and equalizing the quality of life for all, while avoiding the adoption of upper-class waste and consumerism that often occurs with the process.

2. Decentralizing/diversifying water sources may have a great impact on conservation. Rain catchment and grey water systems at the parcel or neighborhood level reduce strain on city infrastructure and can take advantage of natural water (primarily rain and other atmospheric moisture).

David Sedlak, a professor of civil and environmental engineering at U.C. Berkeley and author of “Water 4.0,” traces the expectation of controlled, centralized water distribution to the Roman era. The Roman’s aqueducts supplied their cities with abundant water carried from miles away. But the Roman model doesn’t make sense for large water-limited cities today (if it ever did, ecologically speaking). The millions of residents of today’s cities overburden single-source water systems, especially in times of drought.

Unlike Lima, Los Angeles (another desert city) does get a fair amount of rain in the winter. Elmer Avenue, in a working-class neighborhood of East Los Angeles called Sun Valley, is a prototype for noded smart water management. Rain catchment systems, drought tolerant landscaping, and permeable surfaces collect and redistribute precious water at a hyper-local level, preventing floods and providing water between rains.

3. Learn from the past. Indigenous architecture has often evolved over generations to respond precisely to local conditions. The flat roofed adobe of the Americas regulates ambient temperature (both inside and out) and can be adapted to collect rainwater. The pitched roofs of European-inspired houses don’t make sense here as they are designed for northern climates to shrug off snow. Rethinking native materials and processes often conserves materials and energy over a building’s lifetime.

4. Innovate “dumb”. Low-tech water solutions abound. Warka Water and other projects that use mesh to capture atmospheric moisture and could potentially generate 25 gallons of drinking water per day. Moisture farms are well suited to Lima which, while short on rainfall, is very humid. Improved techniques for passive desalinization greenhouses could reduce water need for this thirsty sector.

These ideas will likely be implemented in the places that need them most, like water-strapped Lima or California. But every settlement should take advantage of conserving technologies and approaches. It is too easy to compartmentalize climate change, to see it happening as “elsewhere”. That is, until your city feels the impact. The truth is we are all living in ecosystems of resource limitations. We’re all stuck on this resilient, yet delicate, closed system of Mother Earth.