Posted at 20:13h in Uncategorized by Builders Ecocity 0 Comments
0 Likes
by Richard Register, President, Ecocity BuildersAre these ecocity times? Perhaps I should put a question mark at the end of my title. Putting forward that notion – that we might be at the dawn of ecocity times – might produce some interesting insights, maybe strategies for success.We are approaching our Tenth International Ecocity Conference to be held in Nantes, France and it is intriguing to notice how much Ecocity Builders and the whole ecocity enterprise going back several decades now has seeped into the unconsciousness of what Tielhard de Chardin called the “noosphere,” aka “noesphere.” By that the Catholic priest, philosopher and evolution theorist meant the total flux of consciousness, unconsciousness and preconsciousness, all that information plus the physical substance housing, remembering, accessing and carrying that information, which is our brains, books, phone wires and microwaves, radio sets, even our schools and cities, and etc. You could even add that the neurological material of all the other animals, their mating calls and displays, warnings of aggression, and even the rudimentary signs of some kind of awareness in plants all participate in wildly various way in the noosphere. You could think of the noosphere in brief as the planetary brain/mind. That planetary noosphere has recently been practicing the design, planning and building, in so many places around the world, bits and pieces of what an ecocity would be if… if all those pieces were drawn together and organized well into a physical new type of city. That’s why I say the ecocity features that are being built now are emerging from an unconscious place rather than a conscious one: it seem impossible for today’s noosphere to quite yet get the overall design of the whole urban system, the largest physical component of the planetary brain going about its citified business. But, ecocity neurological information flux and communications could go live and conscious any time now.[caption id="attachment_3488" align="alignnone" width="408"]

From “Mannahatta – A Natural History of New York City” we see a satellite image of the greater New York metropolitan area taken in 2009. It is pretty much the same today.[/caption]
Read More

Posted at 20:16h in Uncategorized by Builders Ecocity 0 Comments
0 Likes
Editor’s Note: Bhutan is a small country that borders India to the south and east, Tibet to the north and which touches the even smaller former country Sikkim taken over by India in 1975, becoming a state of India, to the west. With a land area of 18,000 square miles, it is about the same size as Switzerland. With its remote location and with its regulated tourism, it remains largely shrouded in mystery to the rest of the world.  The term “gross national happiness” was coined in 1972 by Bhutan’s fourth Dragon King, Jigme Singye Wangchuck. He used this phrase to signal his commitment to building an economy that would serve Bhutan’s unique culture based on Buddhist spiritual values. The assessment of gross national happiness measures quality of life or social progress in more holistic and psychological terms than the economic indicator of gross domestic product GDP which emphasizes growth in production, consumption and accumulating (or dissipating) investment holdings.Ecocity Builders' President Richard Register recently traveled to Bhutan to think through a design for an ecotown at the confluence of the country's two largest rivers with a merging of the measures of Gross National Happiness and ecocity principles.   A month ago I returned from Bhutan, one of the more amazing trips of my life. I spent the next three weeks writing up a report on it all and now I’m contemplating next steps… back to Bhutan?Happiness!The first thing I learned about happiness over there is that, though they are probably even as the Bhutanese themselves say, measurably happier than most, of course it comes and goes and comes back in all of us. Sometimes they are happy, sometimes not, but doing better than most I’d say having lived there for a little less than a month. From my experience outside Bhutan, which is about 300 times the time I’ve been in Bhutan, what I knew about their Gross National Happiness index before going, was that people either didn’t know where Bhutan was or thought it was a generally good idea, so closely were the country and the idea identified with each other. It all seemed rather innocent and positive. So why not play on the old Gross National Product, which somewhere morphed into Gross Domestic Product (who are those economists to decide such things, anyway?) and why not make something of a joke of GDP while advancing happiness a little?Well, it’s a lot more important than that. What is really going on here, or I should say there, is a challenge to the whole construct that is almost like the chant of consensus reverberating around the world, the carrier wave of belief in infinite growth in a finite environment, producing Gross Global Damage and shaking the planet from its atmosphere’s climate change to the very circulation of the oceans, to the shaking of the earth itself – in fracking, mind cracking, even raising the seas for God’s sake and distorting and impoverishing evolution into eternity since extinctions, much less mass extinctions, are forever. That’s how bad the religion of GDP and it mantra of produce, grow, consume, produce, grow, consume actually time without end is.GNH a pretty good idea? Little Bhutan making a playful ironic comment about the big world outside? Hardly. This country is the mouse that roared, but unlike the novel, movie and stage adaptation by that name, by declaring peace on the future, not war on the US as in the fiction version. In the real country’s case, peace is promoted through maximum happiness instead of maximum growth and consumption.
Read More

02 May Co-evolution of our Bodies, Brains and both natural and constructed Environments – Deeper meanings to “As we build so shall we live”

by Richard Register, President, Ecocity BuildersWe are all in it together: we, our fellow travelers on this circling planet, the plants and animals, the very minerals and laws of nature in a constant dance of emergence and entropy, sometimes called evolution."As we build so shall...

02 May Martha’s Vineyard Part One

by David WaightHad enough of Winter? - Ready for a getaway? - Martha's Vineyard Island may just be the perfect end of the winter getaway.  A popular summer resort, famous for its many beaches, it is also a good choice in the Spring and Fall...

by Richard Register[caption id="attachment_3224" align="alignleft" width="300"] Paolo Soleri two or three years before Richard met him, that is, around 1962 or 1963. He is working on his early structures at Cosanti in Paradise Valley, then some distance from Phoenix, now surrounded by urban sprawl.Photo credit:...

10 Apr Takeaways from Ecocity 10 – Solutions for the 21st Century

Posted at 20:18h in Uncategorized by Builders Ecocity 0 Comments
0 Likes
by Richard Register, President, Ecocity BuildersSeems like a long time. The last time I seriously thought we might make a breakthrough for ecocities was back in the mid 1970s. Other than that it’s been gradualism, long hard slogging along, one advance at a time, mixed with occasional reversals. But back then Jerry Brown had been elected Governor of California and instituted the Office of Appropriate Technology and people I actually knew were running it, like Sim Van Der Ryn, then newly appointed State Architect and Ty Cashman, in charge of studying and promoting wind energy in OAT. Huey Johnson, founder of Trust for Public Land was appointed State Secretary of Resources. Ty even put on his wall in his Sacramento office a copy of the “Integral Neighborhood” poster you see here above that I drew in 1977 and printed up as a poster almost two by three feet in 1978.[caption id="attachment_3165" align="alignleft" width="640"]

My drawing for an Integral Neighborhood in 1977 for an actual site in West Berkeley. Bridges between buildings, rooftop uses including two gardens and a large restaurant and interior small pedestrian street on the right are evident in the drawing.[/caption] The “Integral House” had been built, or more accurately, radically remodeled, by Sim and Bill and Helga Olkowski. Next step up toward an ecocity – with integral parts based on what I call these days “the anatomy analogy” – would be the “integral neighborhood.” If the integral house had an attached solar greenhouse and solar hot water system, Clivus Multrum composting toilet and kitchen waste system, organic food garden, food fish pond and bee hive for honey, plus first rate recycling, the integral neighborhood would have in addition living, working, commercial, big gardening both private and community, an internal to the block pedestrian street system like a narrow European lane, café/restaurant, small shops, use of elevated terraces, brides between blocks of buildings and so on, as in the illustration, at the neighborhood scale. As some immediately caught on and said, “It would be like a whole village in the city.” Plus, I’d add, “But also in a new ecologically integrated design.”
Read More 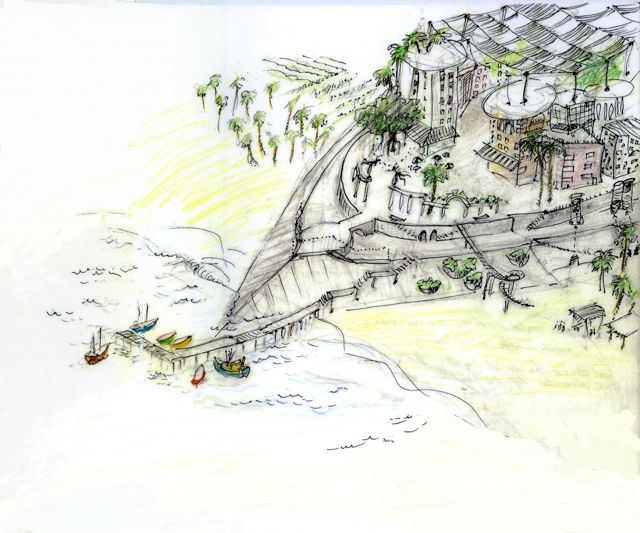 October 27, 2009 and I was getting off Vancouver's SkyTrain at the Lake City Way Station. With me was my friend Jennie Moore, Director of Sustainable Development and Environmental Stewardship for the British Columbia Institute of Technology. "There it is," I said, camera in hand....

Remembering Sandy Hook and ColumbineThis might seem a stretch but when John Muir said everything in the universe is connected to everything else he was serious. He was speaking of the ecology of natural systems in the broadest sense – and human ecologies too, no...

By Richard Register, Founder and President, Ecocity BuildersRichard RegisterWhat on Earth is going on? Well, the US is big and cars are losing popularity gradually as young people turn to portable electronic communications, take in the advantages and direct experience of the pleasures of...