Have you ever run across an advertisement saying dirt is good? Have you ever wondered what would need to happen for garbage to be considered beneficial?

Well, garbage is just garbage until it is turned into a valuable resource. In the case of organic waste, this happens when it is turned into compost, which in turn produces nutrient-rich soil used to grow the food we eat. So dirt is good!

The question of what to do with their garbage has battled residents in Cusco, Peru for ages, where a walk down the narrow streets of the city’s historic center would bring you face to face with a heap of garbage in the walkways or an overflowing garbage trunk at the end of a street.

However, this is beginning to change. Garbage is slowly and steadily diminishing in quantity, thanks to Secondary Cities Urbinsight pilot project.

“I am particularly interested in this project because it involves the community, people, and the environment that we use and live in,” remarked Felipe Rodriquez Aparicio, a resident of San Blas, a neighborhood included in the Urbinsight pilot.

Residents of the sprawling city are beginning to reap the benefits of the composting models they designed and built based on data collected during household solid waste assessments with academic and city partners during EcoCompass workshops and technical trainings.

This has not just reduced the amount of garbage but put the organic waste to use by producing rich soil to grow vegetables and flowers in their gardens. 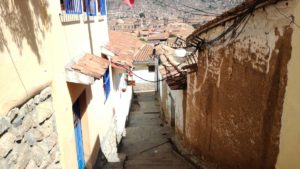 Before the Pilot project, neighborhood alleys like this had piles of garbage lining them.

The chairperson of the Santa Ana neighborhood, Alberto Garcia Montes, who has been personally involved in the process, says the project has been long overdue.

“Honestly, this project is exciting because it motivates to be in an environment that is not polluted. Previously, we never had a culture of recycling waste. We did not care where the garbage went,” he says.

Just one month after the project was initiated and residents were taken through the process of learning how to compost, a growing number of residents were continuing to embrace it as a way to reduce and utilize their garbage.

Another resident of San Blas, Teresa Sanchez, says the project has enabled her to save the money she would have otherwise used to buy supplies for her farm.

“This project is very convenient. We do not have to buy fertilizers from nurseries or stores because we will already be using the natural compost.”

Cusco is one of seven pilot projects that have been instituted under the Urbinsight banner so far. In July of 2017, 14 households were actively participating in the composting program which led to a reduction of at least 95 kilos of garbage during the first week alone.